10 min
Forefoot running and shin splints: 3 reasons why a new running style may not be good 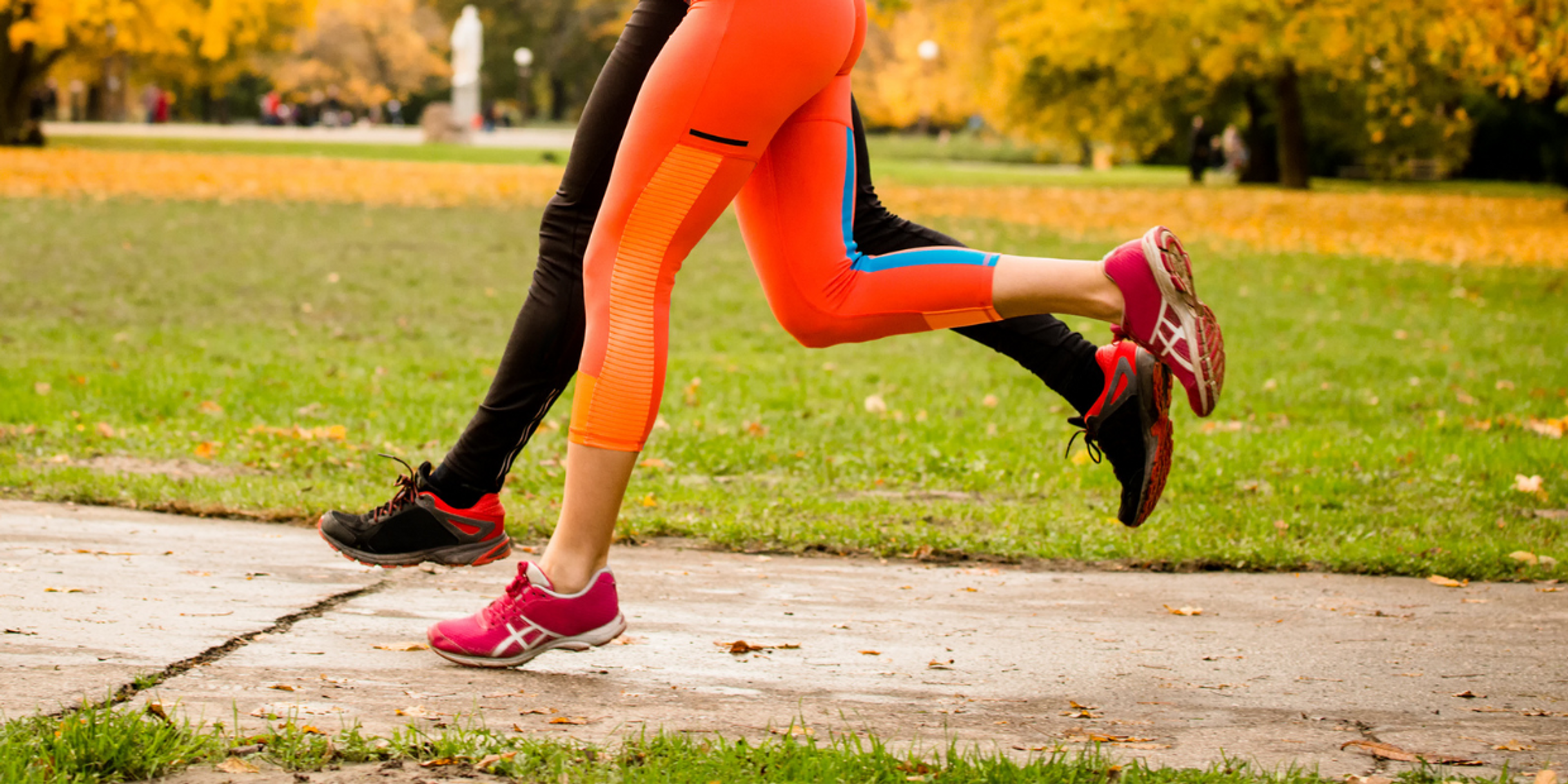 Kim Van Deventer
Oct 13, 2021
Does forefoot running help shin splints? In this article we discuss how this running style differs to others and help you decide if it’s the best option for you.

Forefoot running has become a popular technique in the last few years. You may be considering a change to forefoot running. Or perhaps you’ve been advised to do so by a coach or medical professional to help ease your shin splints. The problem is, many people recommend this running style, and many others warn against it. So, what should you do?

Firstly, don’t panic. If you’re a ‘rearfoot runner’, you are running with the most common foot strike pattern out there. You are not doing anything wrong.

Secondly, your running pattern may not be the cause of your shin splints at all. There are many things that can cause shin splints. Read our overview article on shin splints to find out all about causes and treatment.

Let’s begin by clarifying what the different foot strikes are.

The part of your foot that lands on the ground first determines your foot strike. There are 3 main types: Forefoot (FFS), midfoot (MFS) and rearfoot (RFS).

A rearfoot or heel strike pattern is where your heel makes contact with the ground first and you roll through to push off from your toes.

There is an ‘in-between’ strike pattern called a midfoot strike. This is where your foot lands in a more “neutral” position, in the center of your foot. Neither on your toes nor your heel.

Although in theory there are 3 distinct foot strikes, in practice, your foot strike will be determined by your movement patterns and adjusted to the type of activity you are doing. It is task-specific and dependent on a host of other variables like your speed and the environment you’re in.

Why may people recommend you change to a forefoot running pattern?

There are 3 main reasons people recommend changing to a forefoot strike (or midfoot strike) pattern from a rearfoot strike. They claim:

But are these claims valid?

Although they may sometimes apply in the general context of running, they don’t actually ring true when you’re specifically looking to prevent or treat shin splints.

To explain this, we turned the three reasons mentioned above into questions and answered them by looking at the most up to date research.

No, not always. A more ‘economic’ foot strike pattern needs the least amount of oxygen and carbohydrates to get started and maintain.

Recent studies have shown little or no difference in oxygen or energy consumption between rear-and forefoot strike patterns.

The researchers found that:

The evidence suggests that it may be more difficult for rearfoot runners to switch to a forefoot running style than the other way around. And you may need more oxygen and energy to run using a forefoot strike running pattern.

2. Is there less impact with a forefoot foot strike?

In theory, yes, there is less direct impact with a forefoot foot strike. But in practice, it may not be a good enough reason to change your running pattern. Here’s why.

Movement scientists measure the level of impact that foot strikes apply to your body. They plot these measurements on graphs to get a better idea of what is happening during the foot strike, from start to finish. See the image below adapted from Gruber et al. (FFS: forefoot strike, RFS: Rearfoot Strike).

The downward force applied to the ground by your foot is called the impact peak. The vertical loading rate shows how quickly the impact is applied to your body.

When looking at impact graphs, rearfoot strikes have a higher impact and you can clearly see that the impact is felt sooner. Seeing this may make you believe that switching to a forefoot strike will have less impact and a lower load on your body. But this is where things get a little tricky.

We still don’t know exactly how much force or impact is considered good for bone health and how much is detrimental. Much more research needs to be done in this area.

There’s longstanding debate on whether the loading rate and impact peak measurements mentioned above can lead to injury. Some studies link these factors with injuries, others have found no relationship between them.

Another aspect to consider is what happens during the forefoot strike that diminishes that initial impact peak so drastically? What is absorbing that force to make it look almost invisible on the graph? What structures are involved in reducing that initial impact?

Something has to be taking on those forces as you land on your foot.

Is there less impact with a forefoot foot strike?

Although the direct impact is less with a forefoot strike, that doesn’t mean it’s low enough to affect shin splints.

3. Does forefoot running have a lower risk of running-related injuries?

Almost all the studies looking at the link between injury rates and foot strike patterns have examined runners using their normal running patterns.

We can’t tell whether changing to a new foot strike will improve, prevent or cause more injuries.

To form a running strike pattern, your foot, ankle and leg need to be positioned in a certain way. As a runner, these biomechanical differences between the different running styles matter. They determine how much energy you use throughout your movement and how the forces are directed from the ground into your body when you run.

The load (or impact) on the structures and muscles around your hip, knee, calf and foot are affected by each foot strike pattern in a different way.

Certain foot strike patterns may have a lower impact on the body than others but, from an injury perspective, no foot strike is better than another.

Each running pattern has unique biomechanical advantages and pitfalls. So, each running style may predispose runners to different types of injuries.

Rearfoot running is associated with a longer stride length and more contact with the ground. At initial ground contact, the knee is straighter, and the ankle is more dorsiflexed ankle (toes pointed up). The load is moved off your foot and ankle but increased at your knee. This can lead to problems like patellofemoral pain (classic runner’s knee) and iliotibial band pain.

It is usually associated with a shorter stride length and less contact with the ground. At initial ground contact, the ankle is more plantarflexed (toes pointed down) and the knees are slightly flexed (bent). The load is moved off your knee but added to your foot and ankle. This can lead to shin splints, Achilles tendon injuries, foot pain syndromes like metatarsalgia (pain in the metatarsals) and plantar fasciitis.

As you can see, with each foot strike, the impact simply shifts according to the position of your foot and the angle of the joints higher up.

Does forefoot running have a lower risk of running-related injuries?

Changing to a forefoot running style may not reduce your overall injury risk and can increase your risk of developing shin splints.

Forefoot running is a popular trend with runners, but it's not for everyone.

Changing your stride pattern (and the elements listed above) alone will not cure the underlying causes of your shin splints and it might even make them worse.

Often, the risk of aggravating your existing injury, or developing a new one, outweighs the potential benefits of moving over to a new running pattern.

Keep in mind that shin splints is an overuse injury – and foot strike is not usually the main cause.

To find out the origin of your shin splints, you should start by looking at other factors first. As mentioned in our shin splints treatment article, muscle and posture imbalances, incorrect training methods and poorly fitting shoes are some of the areas you can focus on first.

Forefoot running and shin splints, where do you go from here?

In summary, changing to a forefoot strike pattern to prevent or improve your shin splints is not supported by the research. Forefoot striking has been found to use more energy and put more strain on your foot, ankle and calf structures in particular.

It may lead to worsening of your shin splints or, if you’re injury-free, could cause you to develop them.

What if you’ve covered all your bases in terms of posture, biomechanics and rehabilitation, you have no pain and still feel you want to move over to a forefoot running technique?

We say go ahead and give it a try!

According to the research, there is no better or worse running style.

There is only what is best for you!

But remember. If you do decide to change your running pattern, do it SLOWLY!

Another option you can consider is using a combination of foot strike patterns like many endurance athletes do.

Now that you know forefoot running is good for getting those max speeds and rearfoot running helps conserve energy at slow to moderate paces, why not use that information to get better at your sport?

Become an expert at adapting your running style and preventing injury, no matter what activity you’re doing!